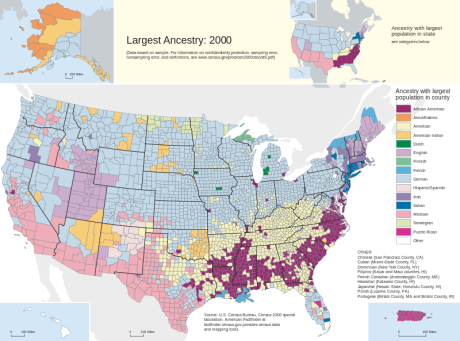 Look at who doesn’t claim hyphenated American ancestry,  the South. The reason for this is (drum roll) immigration. Most immigration from independence until the 20th century went to the north and upper midwest for economic reasons. Notice all the Germans (light blue) and consider the history of Germany and England/Brittain, oil and water. Is it any wonder that after waves of German immigration in the first half of the 19th century that we had a war?

What we have now is a country of many nations. Nations who vie with each other for control of government and, more importantly, culture. Culture is what defines a nation and what causes the most friction when  incompatible. The history of Europe shows us that European cultures don’t mesh very well, why would that be different in N. America?

When the country was small and had a homogenous (compared to today) culture the central government might have been workable. Now that the country has expanded across the continent and lost its cultural homogeniety a central governing body can’t be expected to pass legislation that will work equally well in all the cultures and economies that make up our 300+ million country.

I have been to 38 States and I can attest to the vast differences between the regions. North Carolina, Alaska and Massachusetts may as well be different countries. All three economies have different needs and all three cultures have different wants. Trying to reconcile these differences will always lead to loss of liberty and more centralisation of power. Only despots and emporers have ever united disparate groups and then only temporarily.

There are too many people and too many differing value sets, its time to down size.

Postscript: Somewhere on the web is a very interesting map of 19th century immigration by country of origin, but I can’t find it. If I do, I will update this post because it perfectly illustrates the slogan, “demographics is destiny”.

This isn’t the one i was talking about, but its interesting too. look at the claim of “Southern” and how it corresponds to “American” in the map above. 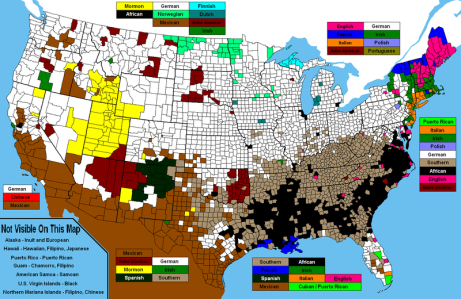 Southern = American in a lot of people’s minds

5 thoughts on “Oil And Water”